Studios of the Creative Class 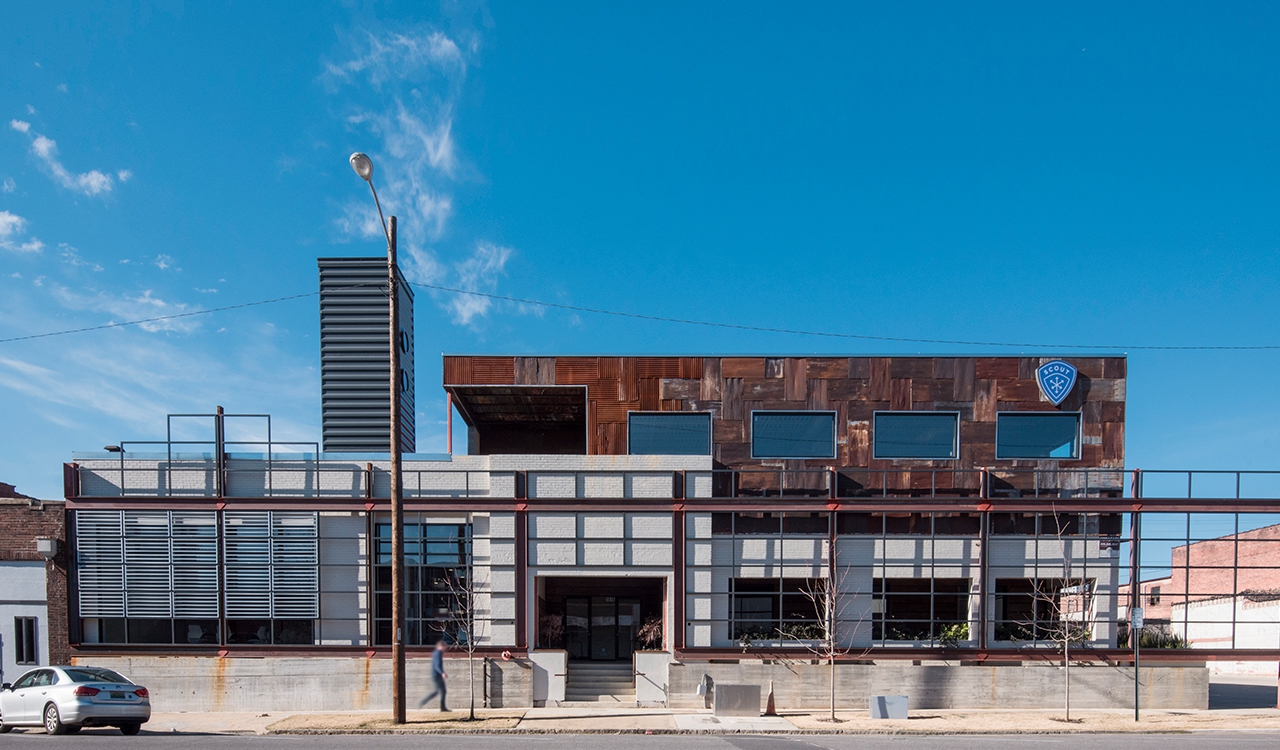 The design of work spaces has evolved rapidly in urban areas with changing technologies and business goals of the new century. A number of those new workplace design trends are gaining popularity in Alabama.

Birmingham, which has been going through extensive revitalization in recent years, has produced three interesting examples of how some of the strongest trends in workplace design for the 21st century are being manifested. Saw Works Studio, the Stockyard and MAKEbhm continue to earn kudos both from architects and the public.

The traditional workplace of the past century typically was divided into offices or cubicles with little to no visibility of other workers and limited common areas, notes Sheri Schumacher, an associate professor who teaches design studio and interior architecture in the School of Architecture at Auburn University. “The emphasis used to be on keeping people separated except for formal meetings. The thinking was they would get more work done without interruptions,” she says.

But current thinking borne out by research shows that workers are more productive and creative when they are able to interact easily with coworkers as they work. Creative fields, including advertising, journalism, architecture and computer technology, have tended toward more open work space plans for many years with great success and are significantly influencing modern workplace trends, Schumacher says.

All three great work places listed above feature large, flexible common areas and other design strategies that foster “creative collisions” and collaboration, says Cheryl Morgan, an architect and consultant who led Auburn University’s Urban Studio for many years. Morgan has served on the Birmingham Design Review Committee, influencing revitalization projects, such as Railroad Park, Red Mountain Park and Sloss Furnaces. “People get better ideas and learn more of what they need to know on projects when they can talk with others,” Morgan says, pointing to ideas she says are aptly expressed in Richard Florida’s book “The Rise of the Creative Class.”

Technology also has changed the need for individual office space. Space for filing cabinets is seldom needed, for example. That allows for smaller individual stations and more room for collaborative space that can be used in various ways. Workplace product and research giant Henry Miller reports 70 percent of companies that have changed their space allotment in recent years have opted for more collaborative, flexible spaces. Henry Miller further reports that “whereas in 1999, space allocation was 73 percent individual and 27 percent group, by 2005 that had shifted to 52 percent individual and 48 percent group.”

Another productivity and morale booster being incorporated more frequently into workplace design and shown in the Birmingham examples is access to natural light, Morgan says. “People don’t have to have their own office with a window, but they do need to be able see outside, how the light changes as the day progresses,” Morgan says. “Studies have shown a direct effect of the presence of natural light on workers’ mood, energy level and productivity.”

Sustainability, including recycling, reuse and historic preservation, is another key trend favorably influencing the modern workplace, Schumacher says. The three Birmingham projects are all based on the adaptive reuse of pre-existing structures and in some cases salvaged materials. “Urban environments like Birmingham often have wonderful structures that can be reinvented for modern uses,” she says.

Not only is sustainability cost effective, it also impresses workers from millennial to boomer generations, Schumacher says. And those generations are more often working together these days. “We’re seeing more mixed working groups these days with a combination of younger and older workers, as well as workers from diverse ethnic backgrounds,” she says. “Companies more often are seeing the value of multiple perspectives, including levels of experience.”

Here’s a closer look at the three award-winning work spaces in Birmingham and how they facilitate great works. 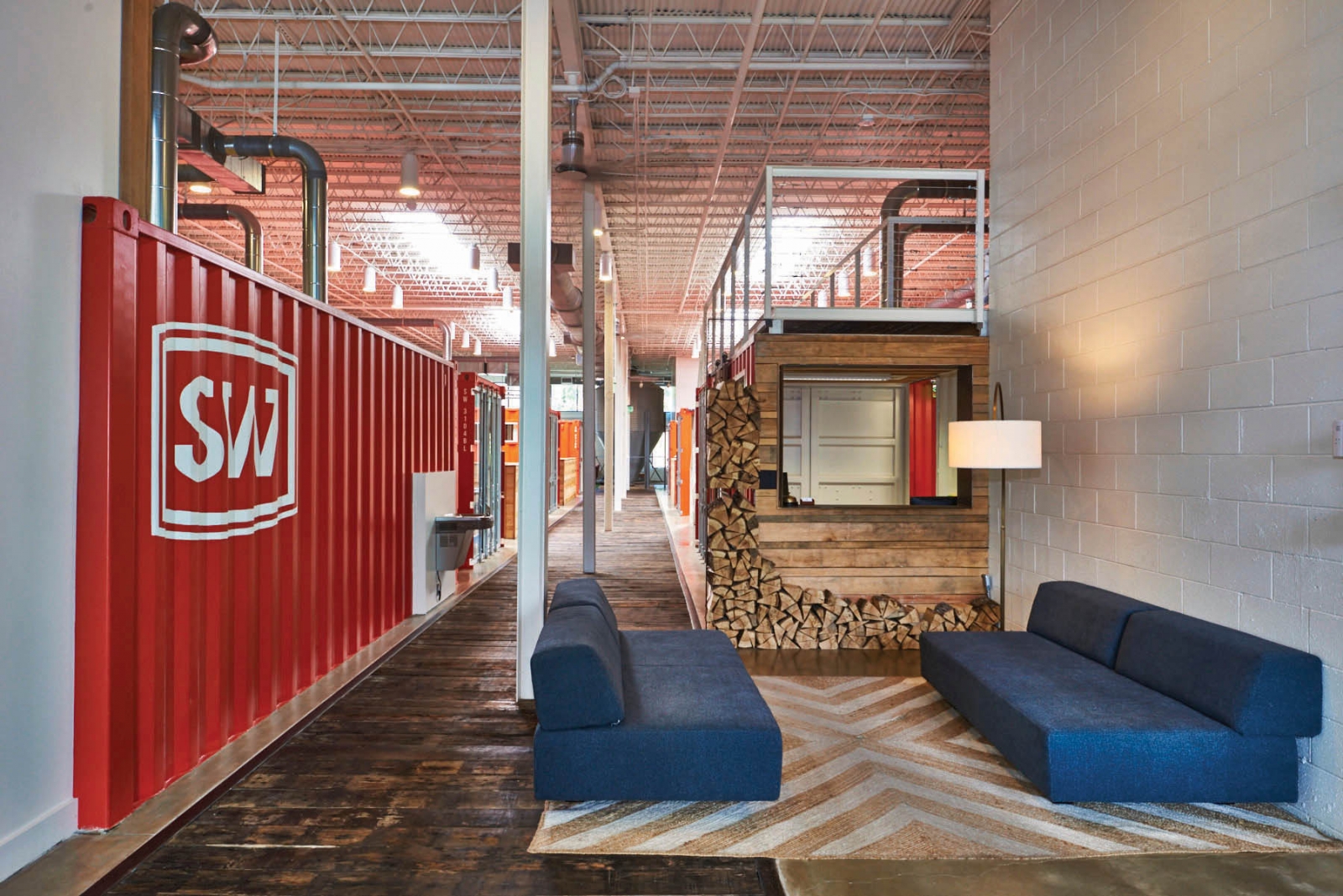 ABOVE The Stockyard at Railroad Park uses shipping containers to create individual and communal office space.

The Stockyard at Railroad Park

Derek Waltchack is a principal at Shannon Waltchack, the commercial real estate firm that owns The Stockyard and has been located there since early 2015. He was introduced to the concept of using shipping containers for workspace use about 15 years ago, while working on a California commercial real estate project. “But the deeper-down fascination probably began even earlier as a kid working with Lego blocks and seeing how you could use them to make so many things,” Waltchack says.

When it came time to create Shannon Waltchack’s new office at Railroad Park, using containers seemed a natural, and, fortunately, Waltchack’s business partners agreed. Scout Branding Co., the second major tenant at The Stockyard, was also interested in incorporating containers into its work space. “Containers have been used for construction all across the world, but it’s not something you hear about doing in Alabama,” Waltchack says. “We wanted to bring it here.”

Shannon Waltchack worked with architectural and interior design firm Cohen Carnaggio Reynolds to create individual and communal office space using painted single-use containers, glass doors and walls, and open space. Scout put its own spin to the container theme, opting for weathered containers and more community space. Whereas most of the Shannon Waltchack team needs more auditory privacy for its workflow, the Scout team needs less. “We are able to use the open visual environment created by glass walls to motion to each other when we need to talk face to face,” Waltchack says.

The use of containers not only gets high marks for sustainability, it also adds a whimsical and creative spin to both Shannon Waltchack and Scout’s workplace, Auburn University’s Schumacher points out. Other fun features include a grain silo at Shannon Waltchack being turned into a treehouse-like meeting space, and the use of a huge fork and spoon in the breakroom at Scout. “Modern workplaces such as Apple and Google often incorporate playful features to stir creativity, making work seem more like a vacation or a playground,” she says.

Other sustainability features include discarded barn siding, rusted corrugated steel and reclaimed wood from local trees. Waltchack keeps bees on the roof. “We wanted to create a space we would feel good about working in and our clients would appreciate,” Waltchack says. 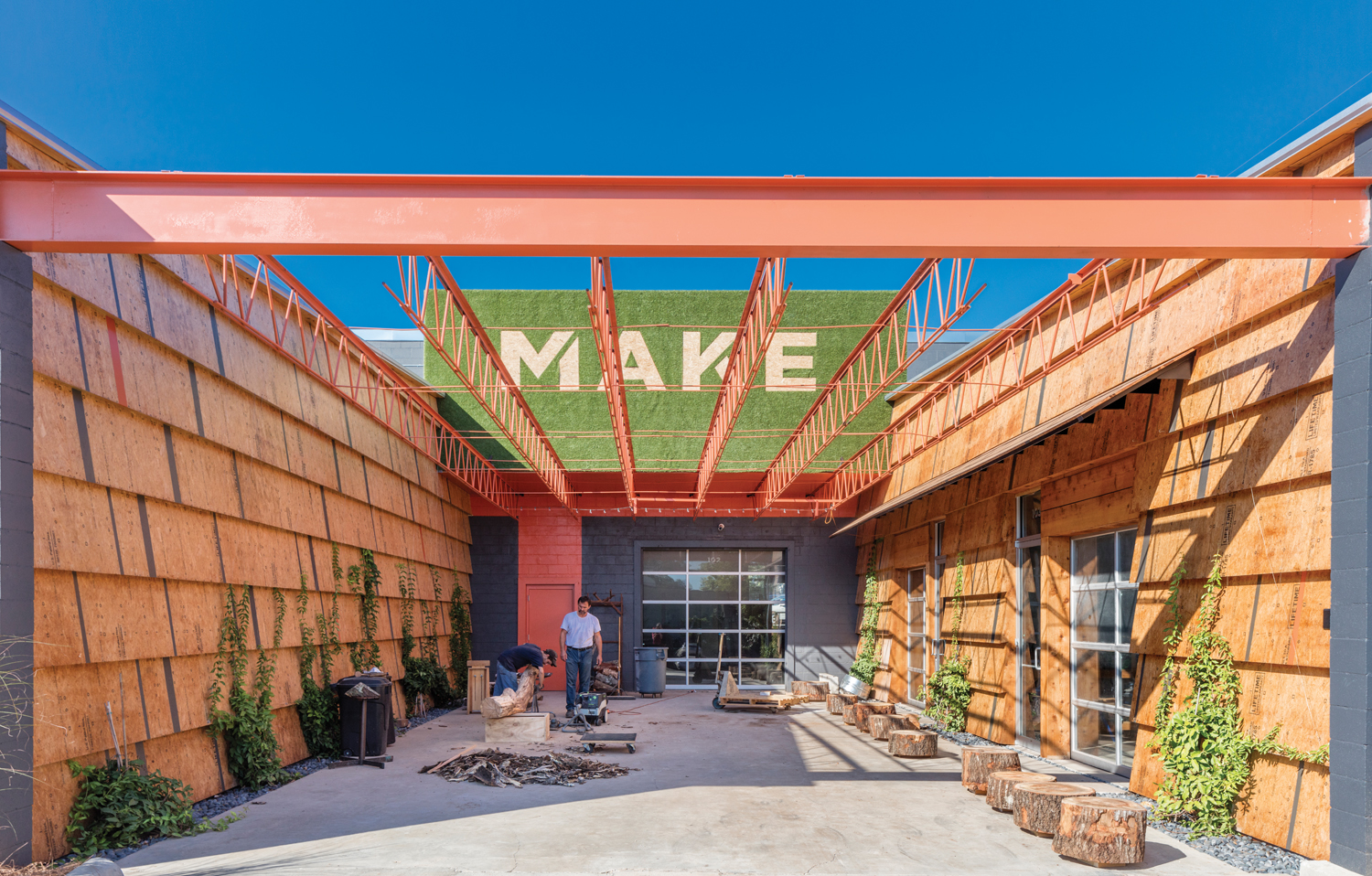 Bruce Lanier, executive director of MAKEbhm in the city’s Avondale area and principal architect with Standard Creative, did not originally intend to create a communal workplace for occupations from ceramics to law, but that’s how his simple, original vision evolved. After he and his wife moved to a home without workshop space, Lanier kept trying to think of ways to be able to get access to woodworking equipment. “Every so often I need to make something, and I didn’t have a place to do it,” Lanier says.

By 2013 he decided to lease a few thousand square feet in Avondale’s Continental Gin Industrial Park and share the costs with other hobbyists and artisans, often nowadays called “makers,” who needed access to equipment. Lanier charged membership fees but soon found the makers also wanted to rent space to set up their own small shops. “It was our beta test,” he says. “We learned a lot of people want to start a side business but can’t afford the major expense of establishing their own location.”

After much thought and discussion with his wife, Scottie, and firm, Lanier decided to relocate Standard Creative into a 22,000-square-foot commercial building, now called MAKEbhm, in May 2016. The renovated and readapted structure features a simple, functional and open design and offers free wi-fi and coffee to all.

MAKEbhm houses Standard Creative and other assorted office-type businesses “coworking” in open space on the second floor. A community kitchen and break area is located on the mezzanine. The first floor is devoted to maker shop floor space and individual maker business space.

In addition to space rental, subscriptions for tool and space for metal, ceramic, wood and print artisans are available through MAKEbhm. Classes are offered for beginners. There is also a boutique and ice cream shop onsite.

“It’s amazing how much this diverse group of people inspire each other and collaborate,” Lanier says. “Our clients (at Standard Creative) are always amazed at the vitality of this place. So much is happening here.”

Ceramic artist Susan Gordon, for example, leases six neighboring spaces and employs additional ceramic workers to help her create handmade ceramic wares at MAKEbhm. Yellowhammer Creative founders were able to grow their printing and design company, quit their day jobs, and spin off to their own location.

“Sometimes people just need the opportunity to be in a space that’s flexible so that they can scale up or down as need be,” Lanier says. 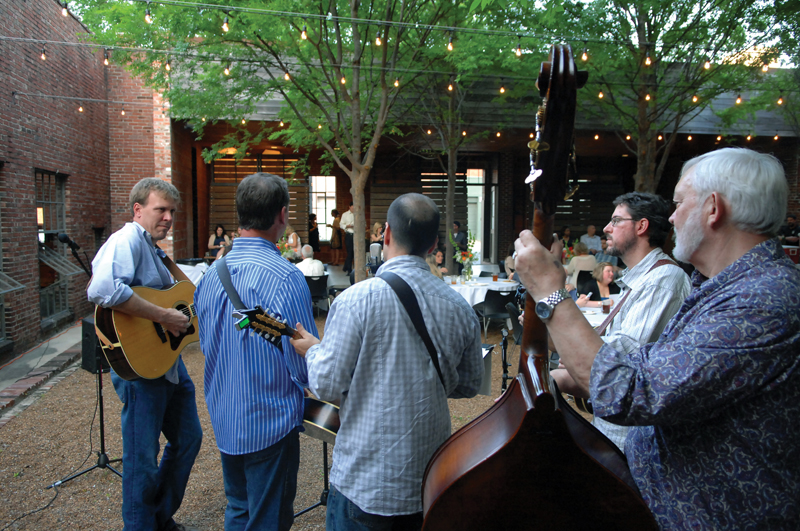 ABOVE SawWorks Studio, a partially sheltered courtyard and workshop, is a hub for Birmingham vision teams and nonprofits.

SawWorks Studio and its adjacent creator and owner, the architecture firm ArchitectureWorks, have had a major impact on downtown Birmingham’s revitalization in recent years. ArchitectureWorks readapted two 1920s brick buildings of the former Birmingham Publishing Company Building Complex, tearing down an infill structure between to create a partially sheltered courtyard with a workshop.

Members of the firm have their own work stations in ArchitechtureWork’s open environment but can call out to each other if need be. Group projects and project meetings are facilitated by the availability of large tables and other flexible meeting spaces throughout the workplace, in the courtyard and in SawWorks Studio. 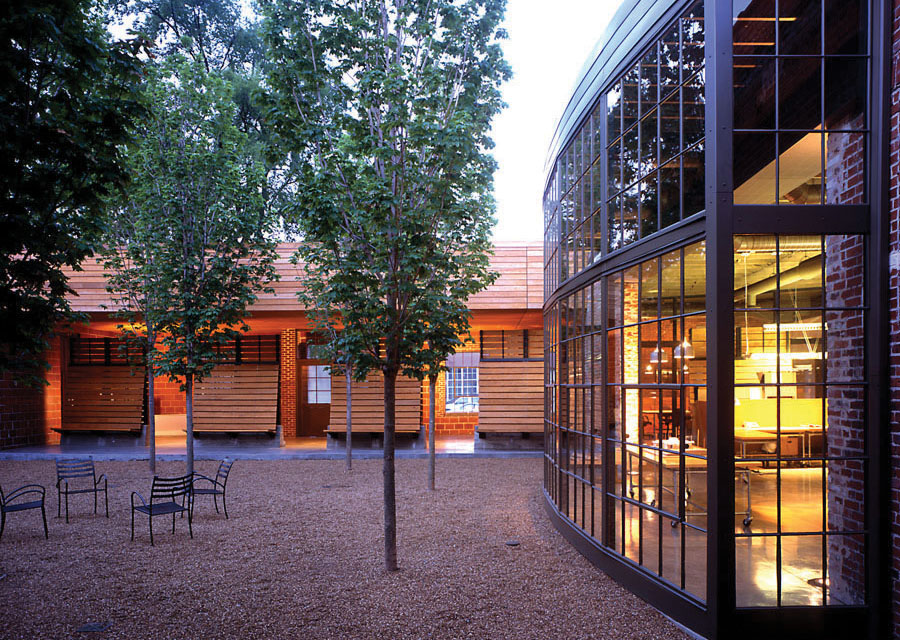 An early adopter of modern workplace design trends, the ArchitectureWorks team created SawWorks in 1999 as a space not only for its own needs but also to facilitate the redevelopment of Birmingham. “We saw Birmingham as the heart of the region, and we wanted to relocate to a place where we could strengthen its health,” says Richard Pigford, partner at ArchitectureWorks.

Pigford and his firm believed that Birmingham vision teams and nonprofits needed a neutral location to work out solutions to the city’s most pressing challenges. Among those who have used the space over the years have been the City Center Master Plan Steering Committee, Friends of the Railroad District, Regional Cultural Alliance/Create Birmingham, Main Street Alabama and UAB.

A number of youth-related organizations have met at SawWorks as well.

Like ArchitectureWorks, SawWorks Studio is simply designed with clean lines showing the original brick of the historic building, bare concrete flooring and high ceilings with visible trusses and ductwork. Large multi-paned windows provide natural light and show off the courtyard in between. SawWorks features a large main conferencing area with a smaller conferencing area that can be closed off when need be, plus a library/loft space and mini kitchen area.

Kathy Hagood and Art Meripol are freelance contributors to Business Alabama. Hagood is based in Homewood and Meripol in Birmingham.