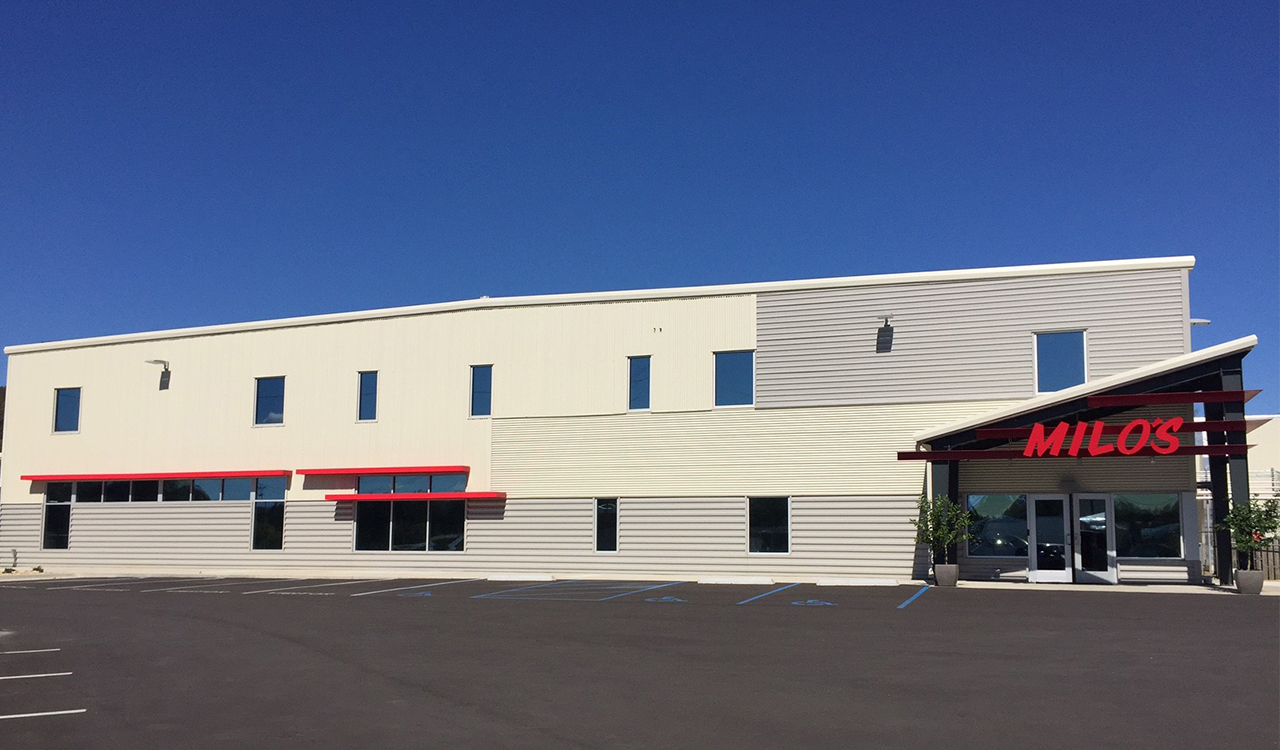 Along with expanding its facility in Bessemer to five times its original size, Milo’s Tea Company is doubling down on making a difference in the lives of its employees and in the communities it serves.

Milo’s employees joined with community leaders to celebrate the unveiling of the expanded 15.5-acre headquarters Tuesday. The centerpiece of the property is a facility with 150,000 square feet of production, shipping and storage space. When it opened in Bessemer 15 years ago, the facility comprised 30,000 square feet on 3.5 acres.

Milo’s Tea is a family-owned business that brews and bottles fresh, all-natural beverages and ships them to 13,000 retailers in 42 states.

“It’s very exciting to celebrate the growth of our facility,” said Tricia Wallwork, chief executive officer of Milo’s and the third-generation leader of the business. “Because of this investment, we can make over 230 gallons of tea a minute at this site and ship up to 90 tractor-trailers a day.”

“We are also investing in quality,” she said. “We know that because our products are different, we have to continue to innovate with quality. We have to invest in learning to make our products better, and in introducing innovative new items.”

Wallwork said the expansion is due in large part to the rapid growth of the company’s employee base, which has tripled to 170 workers in the past four years. While Milo’s is focused on improving production and distribution, she said, it’s also committed to providing a world-class environment for its employees.

“We had outgrown our facility,” said Wallwork. “Because of our growth, we needed more folks to run the business, and that’s not going to change. As we add people, it’s extremely important for us to maintain our family culture, and so investing in those individuals is a big part of our focus now.”

To that end, the company has upgraded areas such as the break rooms, locker rooms, conference rooms and offices. A large covered patio with cooking grills has been added to make it easier for employees to enjoy outdoor events. An innovation lab, water treatment facilities and enhanced water-testing areas are part of the expansion.

Making a difference with Milo’s

Wallwork voiced another of the company’s primary goals, which is to invest in the environment and the community.

“Our slogan is ‘Taste the Milo’s Difference’ because our products are different,” Wallwork said. “We want the community to understand that our company is also different, and we have made a deep commitment to focusing on the environment and the community through our Milo’s Makes a Difference initiative.”

As part of that effort, Milo’s will recycle and reuse the primary waste byproduct from its production process – spent tea. Research has shown that spent tea can be used in potting soil and compost. The company is donating its spent tea to the city of Bessemer for its composting programs and public golf courses.

The company is committed to becoming a “leader in sustainability in Alabama and the country,” Wallwork said, by giving back more than 1 percent of its profits annually through contributions, employee volunteer hours and sponsorships.

At Tuesday’s open house and ribbon-cutting, Bessemer Mayor Kenneth Gulley congratulated Milo’s on its tremendous transformation and for the impact it has made on the city in the past 15 years.

“I’m excited about the growth of Bessemer, and anytime I see a company of this magnitude making an investment in the city, I’m truly grateful,” said Gulley. “Your success is the city of Bessemer’s success. I’m always thrilled when I see products stamped with the city of Bessemer. You can’t get better marketing than that.”

“Whenever you cut a ribbon for a growing, successful company like Milo’s, it’s a win-win for everyone – the company, the city and the state,” said Hilson. “We welcome the opportunity to work with new or expanding companies because we know they lead to job creation, which generates more tax revenue and, as a result, a better quality of life for the residents of Bessemer and the surrounding area.”

Family affair for 70-plus years

The company got its start in 1946 when Wallwork’s grandparents, Milo and Bea Carlton, opened a hamburger shop in Birmingham after he returned from World War II. While the restaurant became known for the “special sauce” on its burgers, the sweet tea, created by Bea as a way of using up excess sugar, has become an American favorite.

In 1989, Milo’s, which had grown into a successful chain of fast-food restaurants, began selling its Famous Sweet Tea to grocery stores in Birmingham. Thirteen years later, the company sold the restaurants and switched its focus to brewing and bottling its popular beverages. Today, Milo’s tea can be found in thousands of supermarkets across the United States.

Wallwork said the vision for the company remains the same today as when her grandparents opened their restaurant more than 70 years ago.

“Their vision was always ‘Listen to your customers, use quality real ingredients and never sacrifice taste,’” she said. “It’s that vision that guides us today, and it’s why we are successful.”

Wallwork also attributes the success of the product to the hard work and dedication of the employees who brew and bottle it every day, as well as to the customers who have made it a household favorite.

“Without our employees, we wouldn’t succeed,” she said. “That’s why we have made a commitment to having the best workplace we can. We want our employees to be as excited about coming to work on Monday morning as they are on Friday afternoon. Milo’s continued growth is a testimony to our investment in our people, the quality of our products and the support of our loyal fans.”