Gadsden officials hope the Venue will be ‘crown jewel’ on waterfront 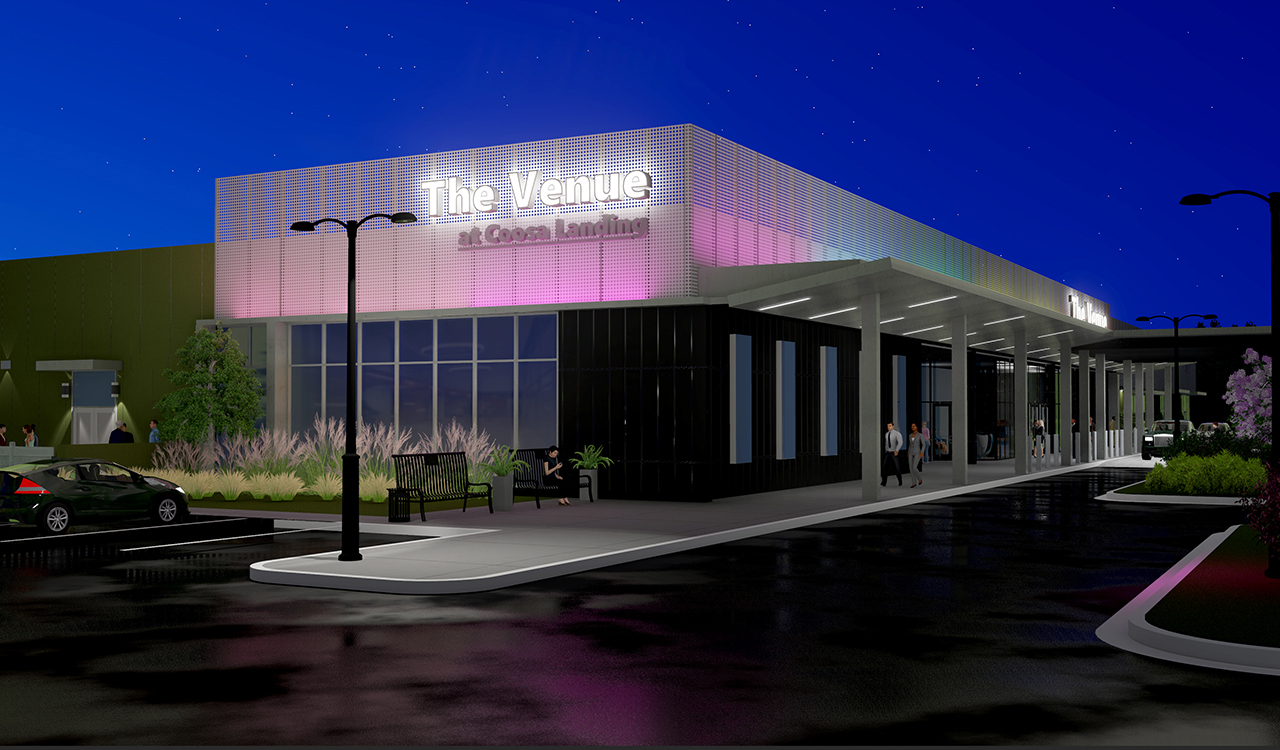 Gadsden Mayor Sherman Guyton stands on the Riverwalk at Coosa Landing. Guyton says it's time for the city to take full advantage of its riverfront. (Karim Shamsi-Basha / Alabama NewsCenter)

While growing up in Gadsden, Kay Moore rarely would venture to the Coosa River, which flows under the Meighan Bridge just blocks from downtown.

“There was an old smelting plant, a nasty and smelly place,” she recalls. “There was a trailer park there, too, but nothing that would draw you down to the river.”

But after Ronnie Watkins Ford opened along the river in the late 1990s, things slowly began to change.

“Little by little, something would be torn down and something else would be built,” Moore says. “Nothing major, but things that eventually began to change the look, and certainly nothing to this scale.”

Moore is referring to the Venue at Coosa Landing, a multimillion-dollar project to renovate a 70,000-square-foot former Kmart, turning it into a conference center that would draw waterfront retail and restaurants.

“At this point, it would be what you would have to call the crown jewel,” Moore says of the $12.5 million project. “There’s been nothing done here on this scale.”

A rendering shows The Venue at Coosa Landing, a $12.5 million conference center being developed along the Coosa River in Gadsden. (Cohen Carnaggio Reynolds)

The Venue is the brainchild of Gadsden Mayor Sherman Guyton, a former real estate developer who went after the Kmart property after taking office 12 years ago.

“City Hall is right across the street, and the Kmart has been closed since I was in office,” he says. “I had my eye on it for a long time. We bought the property, and we’re going to use about 50,000 square feet of it for the conference center. This will be a big facility that can be partitioned off and host up to three events at a time.”

The Venue at Coosa Landing project, which is being paid for through a bond issue expected to be completed in the spring, comes on the heels of the $2.5 million Riverwalk at Coosa Landing, which was completed last January. The Riverwalk, which runs alongside the Kmart property, features a nearly mile-long series of boardwalks, piers, docks, pavilions and walking trails.

“We’ve gone a long time without taking advantage of the river running through our city,” Guyton says. “We want to develop the river on both sides.”

The Riverwalk and Venue projects, both on the same side of the river, should spur development on both sides, Guyton says. The 14 acres owned by the city will feature more than 20,000 square feet of retail and restaurant possibilities, including lots that could handle waterfront restaurants. The city owns 8 acres on the other side of the river (the downtown side) that could also be developed, Guyton says.

That’s music to the ears of Tena King, who has run King’s Olive Oil in the heart of downtown Gadsden for four years, and is the incoming president of the Etowah County Chamber of Commerce.

“We already have bass tournaments and some smaller conventions and stuff like that here, and we’ve found that people love to walk around our downtown,” she says. “Our downtown is already pretty vibrant, but I think this is really going to help us with opening up more opportunities on the river. Once we get the convention center, people will see the beautiful river and landscape. I don’t think people realize how beautiful it is, especially out-of-towners.”

Guyton says about 300,000 people live within a 25-minute drive of Gadsden, and the redone riverfront should draw a lot of them to town.

Moore, who is director of Downtown Gadsden, a nonprofit group dedicated to development, is excited about the possibilities.

“Anytime you can bring in something of this magnitude – thousands and thousands of people – it can only be of benefit to downtown,” she says.

Already, downtown Gadsden hosts popular First Friday events, which feature hundreds of classic cars, food and drink from area restaurants and live music. In addition, the city OK’d a more-than-eight-block entertainment district, which allows people to walk and drink alcohol from 4 p.m. to 10 p.m. every day.

It’s all an effort to draw people to Gadsden and take advantage of the Coosa River just blocks away.

“We’ve taken the river for granted for so long, as you tend to do when you live somewhere,” Moore says. “When Chattanooga redid its riverfront, we said, ‘Hey, we’ve got the river here. Why don’t we do that?’ It’s going to be a boon for the whole economy. It’s going to help everyone.”

The Venue will be central to those efforts, King says.

“Knowing that we will have a facility where we can actively pursue bringing out-of-towners so they can fall in love with our town, that’s a big deal,” she says.

Like Moore, Shane Ellison, an administrative aide to Mayor Guyton, grew up in Gadsden. He, too, says he’s never seen anything like what’s planned for the Venue.

“It’s huge,” he says. “I guess it’s the biggest development ever on this part of the river.”

$12.5 million – The estimated cost of the Venue at Coosa Landing project

50,000 square feet – The size of the convention center

1 mile – Amount of walking trails, piers and boardwalks that are part of the riverfront