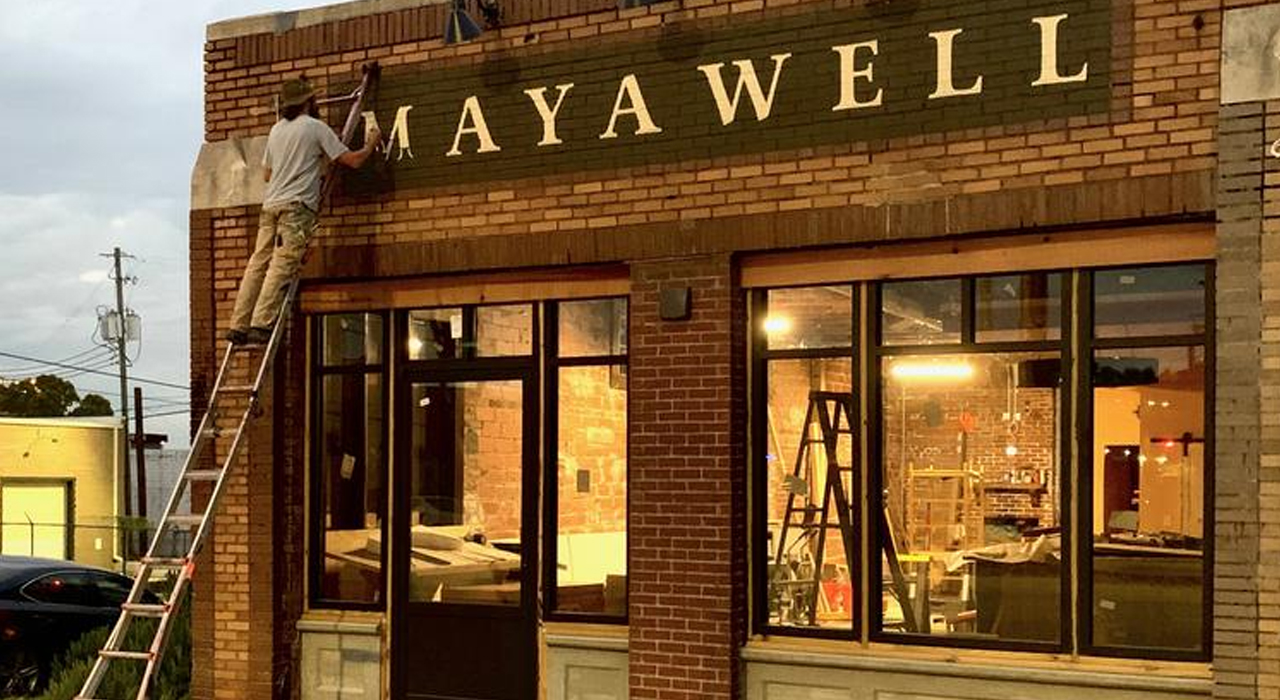 A new bar is coming to Fourth Avenue South between Pepper Place and Automatic Seafood & Oysters.

The bar’s 1,680-square-foot indoor space features a lounge, bar and banquette seating with decor that is rooted in Latin tradition. There is also a 400-square-foot covered patio and a 350-square-foot roof deck.

Robert Crook of Ironvest Partners brokered the lease, Richard Carnaggio of CCR Architecture & Interiors is the designer, and Matt Shelby is the general contractor for the project. Andy Jordan painted the exterior sign and mural.

“Mayawell” is based on the phonetic spelling of Mayahuel, the Aztec goddess of the agave plant and mother of 400 divine rabbits that “promote mayhem, drunkenness, and the spirit of enjoyment wherever they go,” according to Crook.

While the bar focuses on various types of tequila and mezcal, it will also include a full bar of local craft and Mexican beer, wine as well as spirits and cocktails.

“We aim to celebrate the authentic and unique cultures that thrive within neighboring Mexico while maintaining awareness that our context is of a city in the American South,” Crook said.

While the bar is not focused on food, Crook said he plans to partner with someone on a taco truck.

After graduating from the University of Alabama with an MBA and landing a consulting gig, Crook said he wanted to come out from behind the desk and interact with people more. So, he worked at Carrigan’s Public House for a couple years where he learned the business from the ground up before launching his own concept.

“I wanted something to augment the cocktail scene here,” he said. “People understand how to drink whiskey and scotch and that kind of thing, but tequila and mezcal is really meant to be sipped and not taken as a shot.”

The inspiration for the bar came after several trips to Mexico where he discovered the complexities and nuances of tequila.

“However, it was a fleeting romance. It was not until I traveled to Oaxaca and had traditional mezcal that the infatuation truly began,” he said. “I became hooked on sharing the experience of agave-based spirits with my community of Birmingham.”

As the property is fairly large, Crook said he plans to maximize its potential and convert a shed in the rear of the property into event space and a tasting room. He also plans to open a second location in about five years.

Located at 2900 Fourth Ave. S., the new bar is in the middle of Lakeview’s growing and sophisticated culinary scene that has in recent years added Brat Brot, Blueprint on 3rd, Automatic Seafood & Oysters and several restaurants at Pepper Place that will include Chris Hastings’ Hot and Hot Fish Club.

Crook credits veterans of the city’s culinary scene with helping him put his concept together.

“Everyone’s been extremely helpful and very forthcoming with information,” he said. “I was really surprised by that.”